This is our major biennial event and is organised jointly with the University of Leicester where it is held. It is financed from the Harry Hardy Peach Memorial Fund and the lectures have mostly been on some aspect of design. A recent example of a Peach Lecture is “Experiencing Design by Mr Sebastian Conran“. 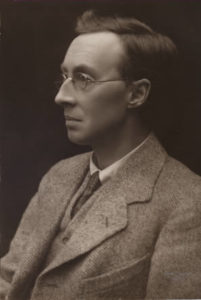 Harry Hardy Peach (1874 – 1936) founded the Dryad Cane Furniture Works in 1907. From the outset quality was the watchword and has been so for all succeeding managements. Harry Peach worked continually to provide craft education.

Harry Peach was a founder member and a driving force of the Design And Industries Association, created in 1915. Its aim was “to instill a new spirit of design into British industry”. If ever there was a man with fire in his belly that man was Harry Peach. “Quality of work” was to govern all his varied activities. It was expressed in his Dryad products and in the numerous pamphlets he published on handicrafts of all kinds. His first love had been printing. He was an insatiable reader of books and other publications on art and design, both English and foreign. He traveled widely and kept himself abreast of all continental development in handicraft and industrial design. In the 1930s he also kept Ramsey MacDonald (then Prime Minister) informed of industrial and craft design in Germany, comparing it to what was being done in this country. Ramsey MacDonald stayed with the Peach family when visiting Leicester.

In developing their ethical approach the founder members of the Design and Industries Association drew on William Morris’s emphasis on the dignity of labour. The aim of the organisation was to integrate art and industry. “Mass-produced goods should bring beauty and pleasure to the humblest dwellings”, the DIA argued, but at the same time should express “fitness for purpose”. They thought that education in design should not stop at the manufacturer, salesman or consumer, but be carried through to the worker at the bench. They produced a pamphlet “The Worker’s Right to Pleasure” and they appealed to the Trade Unions to support the DIA in a strictly non-political way.

During the First World War wounded soldiers were being nursed back to health in the Leicester area and were provided with cane, left over from chair-making, to keep them occupied during their convalescence-an early form of occupational therapy.

Harry Peach wrote articles, made speeches and vigorously pursued the goals of the DIA. Among Peach’s many endeavours to improve the quality of life was his campaign for the preservation of the countryside. By lectures, pamphlets, a new approach of showing photographed examples of bad against good, as in his book “The Face of the Land” 1930, and by his indictment of brash advertising, ribbon development, litter pollution and ever growing scrap heaps as products of profit-making objectives, success was eventually achieved in new legislation. The campaign began under the auspices of the DIA. until Peach founded the “Council for the Preservation of Rural England” as an umbrella organisation to which local amenity groups could be affiliated.

On the death of Peach in 1936 a public subscription was raised to establish a Harry Hardy Peach Memorial Fund to be administered jointly by the Leicester University College and the Leicester Literary and Philosophical Society. The terms of the Trust are: