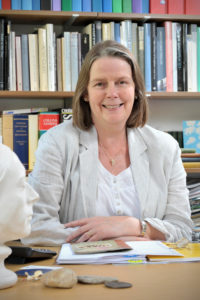 Alison is Professor of Art History at Loughborough University, specializing in the history of British art and sculpture c.1750-1914, including sculpture’s display histories, the Anglo-Italian marble trade and, more broadly, British-Italian cultural transactions and the history of collections and collecting. She has taken leading roles in collaborative research projects and was academic adviser to the Chatsworth Sculpture Gallery redisplay project, and Principal Investigator for the AHRC and British Academy- funded project Mapping the Practice and Profession of Sculpture in Britain and Ireland 1851-1951, with the Institute of Art History, University of Glasgow, the V&A and the Henry Moore Institute. Her publications include studies of public sculpture, notably on monuments to Nelson and Wellington; articles and chapters on women sculptors, country house collections and galleries and on Anglo-Italian cultural exchanges, The Lustrous Trade with Cinzia Sicca, and Travels and Translations: Anglo-Italian Cultural Transactions, co-edited with Stefano Villani and Julia Kelly.

Alison initially took a Foundation year at Chesterfield College of Art and Design before moving into higher education. She was awarded a BA in Fine Art and History of Art at the University of Reading and then completed a PhD at Darwin College, University of Cambridge. Her first post was a lectureship in the History of Art at the University of Leicester where she was later promoted to a Personal Chair and then elected Dean of the Faculty of Arts. She was appointed Richmond Chair and Head of the Department of Art History at the University of Glasgow in 2003, where she was also Honorary Keeper of Fine Art of the Hunterian Gallery and Museums. In 2011 she was appointed Professor of Art History and Dean of the Faculty of Arts and Social Sciences at the University of Hull. She moved to Loughborough in 2014 where she has recently completed her term as Dean of the School of the Arts, English and Drama. Alison is Membre Titulaire of CIHA [Comité International d’Histoire de l’Art] and Chair of CIHA’s UK National Committee. She is a Fellow of the Society of Antiquaries, London, of the Royal Society of Edinburgh, and FRSA. Among her external roles she is a Lay Governor of Glasgow School of Art, chairing GSA’s Museum and Archive committee, a member of the Board of the School of Advanced Study (SAS), University of London and is a Trustee of the PMSA. She is a member of Art UK’s ‘Your Sculpture’ Steering Panel and chairs the Advisory Board of the Sculpture Journal (LUP).