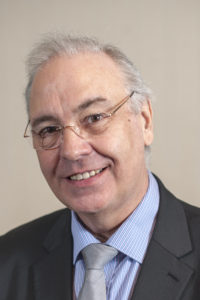 John Fothergill was born in Malta in 1953. He was educated at Slough Grammar School, where he won prizes for mathematics and for music, and at the University of Wales, Bangor, where he studied Electronic Engineering and obtained a BSc, an MSc, and a PhD.
He was a Senior Research Engineer from 1979 to 1984 at the Standard Telecommunications Laboratories (STL) in Harlow. He then moved to the University of Leicester as a lecturer. He received a personal chair in 2000, where he became Dean of Science, Pro-Vice-Chancellor, and Head of the Department of Engineering. In August 2012, he moved to City University London as Pro-Vice-Chancellor responsible for research and enterprise. He has been awarded fellowships of The Institution of Engineering and Technology (IET), the Institute of Electrical and Electronics Engineers (IEEE) and the Institute of Physics (IoP). He is a Chartered Engineer and a Chartered Physicist.

His research has focused on the dielectric properties of material: the way that electrical fields interact with matter. He has published over a hundred refereed papers, several book chapters, and he co-authored a book entitled ‘Electrical Degradation and Breakdown in Polymers’, which has received more than 200 citations. He has supervised 20 PhDs and attracted more than £3 million in research grants. He also led a major EU project on high-voltage DC systems in the European super-grid.

He is married with two children and two grandchildren. He enjoys travelling and classical music and he is a member of Rutland Sailing Club and a Race Officer for the Royal Yachting Association.