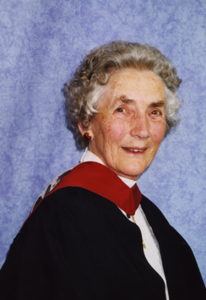 Born on 16th November 1924 at Drumadoon Farm in her ancestral territory on the Isle of Arran, her paternal and maternal grandparents were island folk and her hard-working parents had great respect for education.  At great emotional and financial cost, they sent their three children for their secondary and tertiary education to the mainland.  Jean trained as a teacher at the University of Glasgow, graduating with an MA in 1945 and a Teachers’ Diploma in 1946.  She taught English at the newly opened Arran High School from 1946-47.  She married Arthur Humphreys (Lit and Phil President 1965-66) in August 1947 soon after he was appointed to the Chair of English at Leicester’s University College.  Ten years later, in 1957, he became the Foundation Professor of English in the newly Chartered University of Leicester and also served as Dean of Arts and Public Orator.  The burden on the small group who gave their full commitment to the cause of turning the University College into a University was immense and it was significant that, when that when Arthur gave a prize for distinction in the Department, he insisted that it should be in their joint names.  Arthur was a prolific researcher and writer on English Literature which resulted in Visiting Fellowships in the UK and abroad (see A.H. Biography) and this brought literary scholars to Leicester, often staying in the Humphreys’ home.  Thus, the literary sphere around the Humphreys included not only immediate colleagues who became well known, such as Monica Jones and Philip Larkin, but also visitors like Kingsley Amis, Malcom Bradbury, a former student of Arthur’s at Leicester, and E.M. Forster.  Jean Humphreys has always maintained close contacts with such friends and acquaintances who hold her in high regard and a word from Jean has brought many back to the University or has provided a bridge to The Literary and Philosophical Society.  Her long-standing and staunch support of the University and the City of Leicester earned her an Honorary Masters Degree of the University in 2001 and the University’s highest honour, a Distinguished Honorary Fellowship in 2013.

The oration given by Professor Watson at her funeral can be found here.