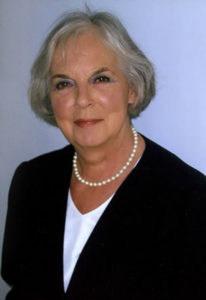 After leaving school, where she had been head girl, Alwyne worked as a secretary in local government. She married John in 1955 and in 1958 they moved to Cheltenham where she worked as a secretary at Dowty Aircraft Company. In 1960 their first son, Nicholas, was born and in 1962 their second Matthew. A few months later they moved back to Lancashire. In 1965 their third son, Edward, was born. They moved to Chester in 1969 and finally, in 1972, came the last move, to Leicester, where John became the City Planning Officer. This offered the prospect of being able to settle permanently. The experience of living in different parts of the country had been stimulating and contrasting – country villages and cities with family life flourishing.

With all sons now at school, this was a time of opportunity to expand interests. Alwyne became a volunteer for the Probation Service, taking responsibility for visits to close relatives of prisoners, attendance at the local Market Bosworth Court to assist the Service and many other duties. In 1975 she was offered a place to train as a probation officer. This came at a time when she had already applied and was offered a place, as a mature student, to study for a degree in Art History at De Montfort University. Art had always been an important part of Alwyne’s life and this opportunity was not to be missed. She accepted a place and after three years of fascinating and stimulating work graduated in 1978.

Following graduation Alwyne worked for a year in a temporary position as Assistant Keeper of Decorative Art at Leicester’s New Walk Museum and this was followed by part-time teaching the History of Design to graphic design students at Derby Polytechnic. This position was affected by cuts in part-time teaching in the early 80’s. At this point she decided to return to secretarial work and joined staff at the Anatomy Department in the Medical School of the University of Leicester. She retired from there in 1990.

1999 – Founder member of the Art and Design Group in Leicester.

The voluntary work, both for the Probation Service and as a J.P., gave Alwyne an insight into the complex and difficult aspects of the realities of life in a city the size of Leicester. The opportunity she had gained to read for an Art History degree enabled her to realise her lifelong interest in art and architecture which continued through the Victorian Society, Design and Industries Association and the Art and Design Group.

Whilst on the Council of the Literary and Philosophical Society she was involved in the transfer of the ‘Peach’ lecture from the University of Leicester in 2000, being a member of the Transfer Management Board (as a representative for the Design and Industries Association). Already having knowledge of the work of Harry Hardy Peach, she was able to express a strong recommendation to the Council to accept the transfer of the lecture from the University to the Lit. and Phil. This was successfully achieved and during the period of 2003 – 2009 she organised four successful Biennial ‘Peach Lectures’.

In 2007 Alwyne suggested to the Council that there could be advantages for Lit. and Phil in strengthening the historic link with the Museum and that this could be done by sponsoring an occasional lecture in support of particular exhibitions. Four of these ‘Partnership Lectures’ have taken place in the years up to 2010 and each one has proved popular and also attracted people from outside the membership.

In 2010, the 175th Anniversary of the founding of the Lit. and Phil. in Leicester, Alwyne was involved with colleagues on the Council in organising celebrations which included an exhibition and special Celebration Evening.

When she was President of the Lit. and Phil. in 2007 Alwyne gave her inaugural lecture – ‘Art, Industry and Worktown’ – and this gave her much satisfaction because it was based on the very important Mass Observation Study in her home town of Bolton in 1937-40.

April, 20ll – Alwyne resigned from the Council of the Lit. and Phil., having thoroughly enjoyed the challenges and stimulus of this eminent Society, still continuing to offer organising services to the Art and Design Group and having more time to follow her prime interest – art and architecture.