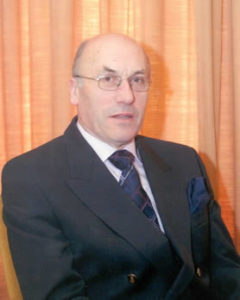 David was born in Leicestershire in 1937 and remained there until 1949 when his family moved to farm in Northamptonshire. In 1953 the family returned to Leicestershire to farm in the village of Frolesworth where he still lives. The farm was both dairy and arable and David particularly enjoyed working with the animals. In May 2006 he retired from active farming.

Although fully committed to the farm including the daily milking (although others helped) he still found time to be involved in village and district activities.

In earlier years he was an active member of Lutterworth Young Farmers Club and the Harborough Division Young Conservatives serving as its Chairman in the fifties. In 1956 he joined the Leicestershire Car Club and was the competition secretary for a number of years until sadly it closed in the seventies. In 1969 he was elected to Lutterworth Rural District Council and following Local Government Re-Organisation in 1973 became a member of the Harborough District Council becoming its Chairman in 1976-77. For a number of years he was Chairman of the Council’s Finance Committee and also served on the Planning Committee. After more than 20 years as a councillor he decided to retire in 1991. In the eighties he was member to the Board of Visitors of Gartree Prison. From 1974 to 2012 he was a Governor of Lutterworth Grammar School, its Chairman for 15 years.

David joined the Lit & Phil in 1991 and was Treasurer from 1996 until becoming President in 2006/07 since then he has been joint membership secretary with his wife Joan.