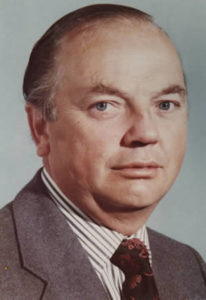 Originally Warden and Lecturer at the Bible and Tring Institute, and then Minister of the John Street Baptist Church, Glasgow, between 1949 and 1954, he came to Leicestershire in 1955 as an Religious Education specialist for Leicester and Leicestershire schools. He moved to the then Leicester College of Education, Scraptoft, as Lecturer in Religious Education from 1964-70, before becoming Vice-Principal of Bosworth College, Desford from 1970-75, and then Principal of Hind Leys College, Shepshed, from 1975-81.

In the meantime he had been ordained Deacon (1966) and Priest (1967) in the Church of England, and on leaving Hind Leys College he became Rector of The Langtons and Stonton Wyville from 1981 to 1986. An Honorary Canon of Leicester Cathedral from 1983, from 1986 to his retirement in 1992 he was Archdeacon of Loughborough, and now is Archdeacon Emeritus.