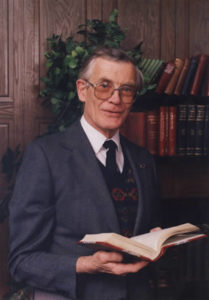 A lifelong Quaker. Born in London and educated at Quaker schools in Somerset and York. Spent two years as a farm worker in lieu of National Service and a year at the Somerset Farm Institute (Cert. Agriculture. [ Distinction]). Then to Reading University (B.Sc. Agriculture. 1955). Joined the Colonial Agricultural Service in 1955 and after post graduate study at Cambridge, (Dip. Agri. Cantab. 1956), and The Imperial College of Tropical Agriculture, (Dip. Tropical Agriculture 1957), was appointed as an Agricultural Officer in Nyasaland. Three years of general district agricultural and conservation work, including the planning and organising of a soil conservation scheme in a heavily cultivated part of the Shire Highlands; was followed by four years as senior lecturer to the Department’s staff training school (The Colby School of Agriculture). The school ran a two year course that qualified trainees for appointment as Agricultural Instructors in the Government Extension service and a one year upgrading course. Courses had a practical bias similar to that of Farm Institutes in Britain at that time. Promoted to Senior Agricultural Officer in 1965 whilst acting as the School’s Principal.

In 1966 was posted as Regional Agricultural Officer responsible for all agricultural services in the Northern Region of Malawi (now independent). After vacation leave was loaned as lecturer in extension to Bunda College, the newly established agricultural faculty of the University of Malawi. Given special responsibility for a course designed to fit experienced Agricultural Instructors for promotion to senior grades, then predominantly filled by expatriate staff.

In 1969 commenced work in the headquarters of the Ministry of Agriculture and Natural Resources as Senior Extension and Training Officer in the Department of Extension but with responsibility for advising on training matters throughout the Ministry. Member of the National Advisory Council for Technical Education.Prepared project proposal for a Natural Resources College to undertake the basic training of certificate level staff throughout the Ministry. Promoted to principal grade in 1971. From 1977 was responsible for the coordination of the National Rural Development Programme led by the Department and Training until post was localised in 1980.

From 1982-1986 undertook 5 consultancies for the Investment Centre of the Food and Agriculture Organisation [FAO] as extension/organisational specialist in project identification or preparation missions. In 1987 completed a study of the“Effectiveness of Externally Financed Projects in Improving the Agricultural Productivity of Women” for FAO. Due to family commitments no further agricultural work was undertaken.

Awarded the OBE in 1978. Publications The “National Rural Development Programme” [in Malawi ] Report of a Social Service Conference, University of Malawi 1978.

Presidential Address 1990 : “Malawi : One Man’s Vision” Transactions of the