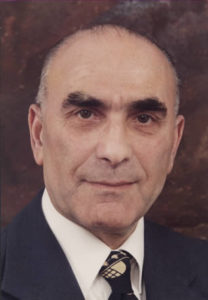 Bernard Fisher was born on the first day of September 1915 in Gateshead-on-Tyne to a poor working class family. He astonished his parents at age 9 by informing them that, inspired by one of his elementary teachers, he had made up his mind to become a teacher, but they struggled to give him a university education.

Educated at local primary and secondary schools, on completing his Sixth Form studies, he was awarded a Kitchener Scholarship, tenable at Armstrong College (later King’s College in the University of Durham, and today a University in its own right as Newcastle University). His major subject was French with subsidiary English and, under the distinguished guidance of Professor Girdlestone, he gained a B.A. Hons. Degree in 1937, followed in 1938 by a Diploma in the Theory and Practice of Education in the Department of Education, in 1938. In 1940 he qualified for his Durham M.A.

But the 1930s were the Depression years, and in 1938 it took him several months to find even a temporary post in a Junior School, only to be dismissed at the end of November because, as he was informed, “all temporaries suffer the same indignity in order to enable the L.E.A to avoid payment of Christmas salaries”! However, as he had been assured, there was no problem of re-engagement the moment term resumed.

With the outbreak of war the whole school was evacuated on September 1st 1939 to a village in Yorkshire where he served as Deputy Head until his call-up in May 1940. Before the outbreak of war, he had volunteered for, and been accepted by the Intelligence Corps, and after basic training was transferred in October to the Corps. He served in Gibraltar as a sergeant until 1942, when he was recommended for officer training, and was commissioned from Sandhurst Military Academy in the same year. Some eighteen months later he was chosen to undertake a course in Japanese and on completion was posted to India en route for Burma and Japan. But the atomic bomb and the surrender and occupation of Japan by America put an end to his aim to go to Japan, and after 6½ years’ service he returned to England for demobilisation.

Experienced teachers returning from the War faced difficulties in obtaining permanent posts because the Local Education Authorities were requirement to pay annual salary increments covering war service, and financially-strapped LEAs chose new graduates to save money. To achieve a qualification which might attract appointing committees, he undertook and obtained a Licence-es-Lettres of Lille University between 1948 and 1950. After a short period at West Ham secondary school, in 1951 he became Head of Modern Languages at John Ruskin Grammar School, Croydon, where he remained for six years.

In 1957 he was appointed Head Master of the newly-created King David School, Liverpool, a voluntary-aided Grammar/Modern Bilateral School sponsored by the Orthodox Jewish community. Here his major challenge was to interpret and organize in the city the principles and practice of this educational innovation of bringing together into a single school the traditionally separate grammar and secondary modern schools. As virtually nothing had been written about Bilateralism, he applied for, and was accepted as a part-time student of Sheffield University to undertake research into the subject, and spent five years in practical and theoretical study of Bilateralism under the wise guidance and encouragement of one of Britain’s greatest Professors of Education, W.H.G Armytage. On November 25h 1966, he was awarded his Ph.D. The title of his thesis was “The Development of Bilateral Secondary Education in England and Wales since 1940”.

Dr. Fisher might have been content to remain in Liverpool where the School flourished and within five years obtained its first Oxford place, had not Professor Armytage not asked if he intended to stay there, adding that he had other ideas for the future – heading a College of Education. Faced with the constant requests of Prof. Armytage, more to save himself the embarrassment of refusing Prof. Armytage than in any belief of a successful application, Bernard Fisher decided to apply for three colleges. His third and last application was to the City of Leicester College, a well-established teacher training college, where to his astonishment, he was appointed Principal in 1966. That was the beginning of his service to Leicester and there he was fortunate indeed to enjoy and appreciate the friendship and support of Dr. Elfed Thomas, the Director of Education (President of the Leicester Lit and Phil 1969-70).

In the period between 1966 and 1977, the College expanded to some 1600 students, with annexes in Corby and Northampton in addition to its Scraptoft Hall Headquarters. The National College for the Training of Youth Leaders, based in Humberstone Drive, Leicester, established following the 1960 Albemarle Report, was also by then an important branch of the College of Education. However, the 1972 James Report on Teacher Training led to the end to so many of the finest Colleges of Education and following the James recommendations the Leicester College of education was amalgamated with Leicester Polytechnic where Dr Fisher served as Senior Assistant Director until his retirement in 1977 (for his last year with Dr. David Bethell as Director – Leicester Lit and Phil President 2002-02).

During the 1970s Dr. Fisher lectured in Canada, America and Israel, and it was at the proposal of Ministry officials at a Conference in Jerusalem that he decided to emigrate to Israel. He left England in 1982, and still continues his educational activities in his new homeland.

He was very active in a number of local and national voluntary organisations. In addition to his work with the Leicester Lit and Phil, Dr. Fisher was among other things President of the Leicester Hebrew Congregation from 1977 to 1981, Chairman of Voluntary Service Overseas (VSO), Centre Director and a Trustee of Menphys, and a Citizens’ Advice Bureau Counsellor.

His publications include “Ten of the Best – lectures in Jewish History”, “ A Headmaster Remembers – the first decade of the King David School”, ‘Vindicating “The Friend” – a sequel to Brigadier Mead’s “ Orde Wingate and the Historians” and “Destiny – pages from the story of our lives”.

Sources: With grateful thanks to Dr. Fisher who prepared these detailed notes in October 2011; Leicester Mercury 28 October 1982; thanks also to Linda Butt, Archivist, De Montfort University.