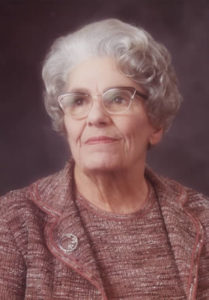 Jennie Cameron was born in 1906 in Massachusetts, USA, the daughter of Lucy Pinkham Burnham and was very proud to be a grand-daughter of the almost legendary Lydia Estes Pinkham (1819-83), still remembered in popular literature and song as “Lily the Pink”. Lydia had founded in 1876 the outstandingly successful family patent medicine business near Boston around her “Lydia E. Pinkham’s Vegetable Compound”, produced to her own secret recipe for the relief of “women’s problems”. By the time of Jennie’s birth the business had grown to a very large scale (and profitable) operation with worldwide sales, and in addition was answering over 100,000 letters a year from women seeking advice on menstrual, menopausal and related health problems. By 1925 the company’s turnover was over $4 million a year, and though by 1936 the family had lost control of the original company following internal disputes and sales of some of the blocks of family shares, a version of the “Vegetable Compound” (in fact a number of herbs, mostly of now-proven efficacy – helpfully served in 19% alcohol!) is still produced by the international medicines company Numark Laboratories.

Jennie Burnham was brought up in the Boston area and educated at the prestigious Dana Hall, Wellesley. In September 1926 she married at the family home in Winchester Massachusetts Oxford-educated Donald Ewan Cameron (1902-69 – not to be confused with the very controversial Scottish-American psychiatrist of the same name and similar dates). Cameron was born in Leicester, the son of a prosperous Canadian-born Leicester industrialist, Ewan Cameron. Their family firm, Boston Blacking Co. Ltd. of Northampton Square, Leicester, with a factory at West Street, Syston, manufactured stains and polishes for the boot and shoe industry. The family home was “Lyndhurst”, an imposing twelve room house on London Road, Stoneygate, (now replaced by a block of 24 flats). After the marriage Jennie and Donald settled in Beechcroft Road, Stoneygate, moving to Kirby Muxloe after World War II.

In England Jennie Cameron was soon very much involved in community and charity work of many kinds, and remained so for the rest of her long life. For example, the Pinkham company and family archives at Harvard University contain a file of press cuttings etc. relating to her work in the early years of the War, and a decade later she was awarded the British Empire Medal for her outstanding work in helping to organise relief work and fund-raising after the disastrous North Sea flood of January – February 1953. Within Leicester she was among many other things a member of the Lit & Phil from 1959 to her death, and of the Leicester Inner Wheel Club from 1962, again to her death. Within Inner Wheel she was President of the Leicester Club in 1961-62 and the District Chairman for 1972-73, while she supported her husband during his year as President of the Rotary Club of Leicester in 1960-61.

Presidential Address: The founding of the USA: 1776 and all that. Trans. LLPS, vol. 73, pp. 3 – 12. (Note: her Christian name is misspelt “Jessie” in both the contents page and the header of her paper in the Transactions.)

Personal recollections of conversations between Mrs. Cameron and Patrick Boylan