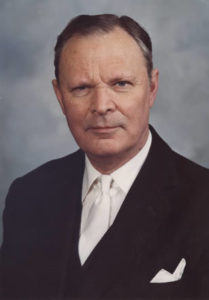 Canon Gundry was educated at Sir Walter St. John’s School, and then King’s College London (BD and AKC 1939, M.Th. 1941). Ordained Deacon in 1939 and Priest in 1940, his first appointment was as Curate of St. Matthew, Surbiton, after which the next 19 years were spent in university teaching, first as Lecturer in Religions at the University College of North Wales, Bangor, from 1944-60, and then as Professor and Head of the Department of Religious Studies at the University College of Ibadan, Nigeria, 1960-63.

He came to Leicestershire in 1964 as Canon Residentiary and Chancellor of Leicester Cathedral, and served in this and other Church capacities in the diocese to his retirement in 1987, as well as serving as Chairman of the Alderman Newton’s Educational Foundation. He was also a noted author and commentator on religious affairs, best known for his long period of service as the Daily Telegraph’s correspondent and commentator on Church affairs.