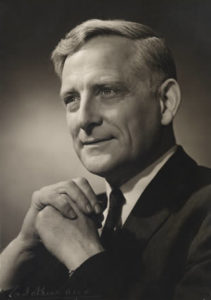 After two years teaching English at Cambridge (1935-37) he was Lecturer in English at Liverpool University from 1937-46 (with war service with RAF Intelligence and the British Council, Istanbul). In 1947 he was appointed Professor of English at University College Leicester, and was one of the Founding Professors of the Chartered University of Leicester in 1957, and also served as the first Dean of Arts and as Public Orator.

A prolific researcher and writer on English literature, particularly that of the 16th to 19th centuries, he was in much demand as a Visiting Fellow (All Soul’s College, Oxford, 1966 and the Huntingdon Library, California, 1978-79) and Visiting Professor (Bogazici University, Istanbul, 1979-82, and 1984, and Singapore University, 1982-83). With his wife, Jean (Lit and Phil President 2009-10) he was a great supporter of music and the arts in the City and Council.