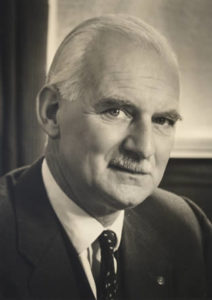 Roger Evans was the son of William Arthur Evans (1865 – 1942) and Annie Evans, née Goddard (1882 – 1974). He joined the Imperial Typewriter Company, Leicester, founded by his father, becoming Works Director and joining the Board. Within the company and the industry he specialised in production engineering, becoming a Member of the Institute of Production Engineers and chairing the Institute’s Materials Utilisation Sub-Committee.