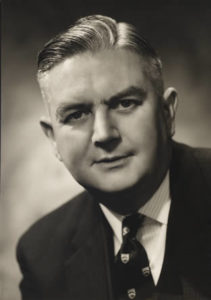 Born in Peterborough in 1916, Trevor Walden was brought up in Leicester and attended the Wyggeston Boys’ School. He joined the Leicester Museum straight from school as a Student Assistant from 1934-38, and followed the newly established Museums Association Diploma training programme and examinations under the tuition of the Museum’s Director, Dr. Edwin Lowe (Lit. and Phil. President, 1922-23). In 1938 he was appointed Assistant Keeper in the Halifax Museums, and this was followed by war service in the Royal Navy from 1941-46. In 1947 he returned to Leicester Museums as Keeper of Biology, and was promoted successively to Deputy Director in 1949 and Director in 1951. In 1972 he moved to the directorship of the Glasgow City Museums and Art Galleries, holding this position until his sudden death in 1979.

His 21 years as Director of the Leicester Museums and Art Gallery saw major expansions and innovations across the Service. These included the re-opening of the war-damaged Newarke Houses, the creation of six new museums: Jewry Wall Museum, the Museum of the Royal Leicestershire Regiment, temporary Road Transport and Railway Museums, the Abbey Pumping Station and the Wygston’s House Museum of Costume (completed and opened in 1974). Other important developments, both innovations nationally, were the establishment of a professionally led Museum Design Department and a permanent museum-based Archaeological Field Unit. At Glasgow his achievements included getting under way the new purpose-built museum in Pollok Park for the Burrell Bequest, after many years of delays.

Professionally Trevor Walden was a leading figure in the UK and wider museum movement, leading the Museums Association’s Education Committee through a major modernising of the Museums Diploma programme of which he had been one of the first graduates, and he was President of the Museums Association for 1970-71. Locally he made important contributions to many organisations, including the University of Leicester, where he took a leading role in developing the UK’s first University-based postgraduate training courses for museum professionals, the Department of Museum Studies. The University recognised his achievements with the award of an Honorary MSc in 1965. He also was closely involved in the campaign to establish the UK’s first local radio station of modern times, BBC Radio Leicester, serving on the Local Radio Council from its formation to his move to Glasgow.