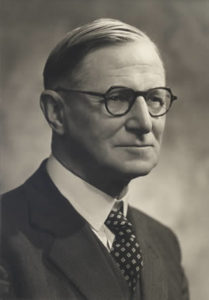 Born in Nottingham but brought up in Leicestershire, Clement Ogden was the nephew of the architect Cecil Ogden, best known for designing the Grand Hotel (now Ramada Jarvis Hotel) in Granby Street, Leicester. Clement followed his uncle into architecture, with his own practice in Millstone Lane, Leicester (later Ogden and Dodd). One important earlier building was the new Lloyds Bank in Hinckley in an adaption of the Queen Anne style (1928), while much later in his career he undertook two unusual rescue jobs restoring and converting what was left after the partial demolition of important country houses wrecked through neglect and military occupation during World War II: Gaddesby Hall, Leicestershire, and Tickencote Hall, Rutland.