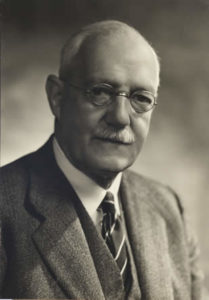 Christopher Gimson was a member of the well-known Gimson family of Leicester. The son of Josiah Mentor Gimson (President 1900-01), he was educated at Oundle School and Emmanuel College, Cambridge, playing cricket for both Cambridge University and Leicestershire. Though his father was a very prominent Secularist, Christopher was, like many of his family before and since, a member of Leicester’s Unitarian Great Meeting.

Exceptionally tall his uncle Ernest Gimson made a special 7ft single oak bed for him, which was donated to the Leicester Museum by Douglas Smith 1988. He also commissioned and donated a set of Gimson furniture for the Council Room of the University College.

He entered the Indian Civil Service in 1911 and spent most of his career in Assam. He was to the independent Princedom of Manipur in 1918, first as President of the State Durbar and became Political Agent in 1933. He was highly regarded by the Indian population of the State. He was described as combining a quiet efficiency with a relaxed approach to his job and a genuine ability to relate to Manipuris at all levels There is an oral tradition, preserved in H. Bhuban Singh (The Merger of Manipur, Imphal 1988), that Gimson used to venture out at night into the market, hidden beneath a voluminous shawl, and listened in to what the market women were saying about current affairs; he would then engage them in conversation and try to address their problems.

He is particularly remembered in modern Indian history for his sensitive handling in 1941 of what became known as the Women’s War, and the negotiations that brought Manipur into India proper at the time of Independence. He was made a Companion of the Indian Empire (CIE) in 1943, and retired back to Leicester in 1947.

References: ‘GIMSON, Christopher’, Who Was Who, A & C Black, 1920–2007; Arambam and Parratt: The second ‘Women’s War’ and the emergence of democratic government in Manipur at: http://www.kanglaonline.com/index.php?template=kshow&kid=6&/