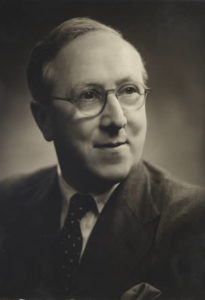 Born in Skipton, Yorkshire, where his father was a foreman in a sewing cotton manufacture factory, Kenneth Holmes was educated at the Erymsteds Boys’ Grammar School, Skipton to 1919. This was followed by two years at the Skipton School of Art, 1919-21, and a further two years at the Leeds College of Art, 1921-23. From there he went to the Royal College of Art, London, studying there from 1923-27 and taking additional courses at both the Chelsea School of Art and the Central School of Art and Design. He graduated from the Royal College in 1927 with its Art Masters’ Certificate (1923), the ARCA in Design and ARCA in Engraving, both in 1926, and a Teaching and School Management Certificate (1927).

Following the Royal College Holmes studied abroad and practised his art both in England and in Europe for two years, mainly in Italy, but also in France and Holland. Between 1930 and 1932 he had two part-time teaching positions simultaneously at Croydon School of Art and the Borough Polytechnic, Southwark. He then was Principal of the Huddersfield Technical College from 1932-34, at the same time serving as Adviser on Art Education in Schools to the Huddersfield County Borough Council.

In September 1934, at the age of only 32, Holmes became Principal of the Leicester College of Art (one of the predecessor institutions of De Montfort University), which was by then already recognised as one of the leading colleges in the country, not least because of what had been achieved at the School/College of Art under Benjamin Fletcher, Head from 1900 to 1920 (and Lit and Phil President, 1919-20). Even though much of his 22 year period at Leicester were overshadowed first by the Depression of the 1930s and then by World War II and its economic aftermath Holmes achieved much across all the areas of the work and art and design forms in the College, with architecture and textile design being amongst the perhaps most noteworthy.

For example, within months of his appointment he was upgrading the interior of the College, and its teaching collections: in January 1935 he obtained the permission of the College of Art Committee to “clear out” a total of 37 plaster casts of sculptures and architectural design features previously used for drawing and reference as “no longer of use to the college”. Instead he quickly moved to developing links with businesses and other organisations at the leading edge of contemporary design and manufacture and in particular to obtain from these examples or photographs of their best current work. In 1935, for example, such acquisitions included complete sets of all that year’s Christmas cards produced by each of seven leading publishers and printers and a similarly complete set of the year’s Christmas shopping posters of London Transport. Other deposits of photographs and objects from major British manufacturers illustrating contemporary art and design for teaching purposes included large donations from Doulton, Shell Max & BP, Wedgwood and the leading contemporary designer and manufacturer of lighting fittings, Troughton and Young Ltd.

Following on from his twin role at Huddersfield as Principal of the College and chief Art Adviser for the town’s schools, Holmes also quickly became a leading figure both locally and nationally in promoting innovative approaches to the teaching of art and design in schools at all levels. His experience in this area was summarised in his joint book of 1952, co-authored with Hugh Collinson (1909 – 2009: Leicester’s long-serving Art Adviser and Holmes’ Head of Art Teacher Education in the College): Child art grows up (Studio Publications, London, 1952). His very considerable achievements were recognised nationally with the award of an OBE,

From his days at the Royal College of Art in the 1920s Holmes had been recognised as a significant artist. He worked in several media: above all in etching, though also in wood engraving, line engraving, aquatint, mezzotint, drawing and watercolour, the subjects being mainly landscapes, townscapes and architecture, with Italy and England as particular favourites. (In recent years a number of oil paintings of mainly Cornish landscapes and the coast, apparently painted for his own enjoyment and recreation, have also come onto the market, and these show that he was also a significant artist following the Newlyn School tradition as well.)

During his 1927-28 period studying in Italy he was awarded the prestigious Prix de Rome for his drypoint etching The Flight into Egypt. This was followed by very many exhibitions and sales, including over the years 16 one man exhibitions in London, one each in Glasgow and the Walker Art Gallery, Liverpool, a number in Leicester, while over the years he had many works accepted for group exhibitions and salons, including 11 in the Royal Academy annual exhibitions, and 6 in those of the Royal Hibernian Academy, Dublin, and in an exhibition of War Artists held in the National Gallery, London.

He also travelled widely abroad, most notably in the United States, where his watercolours, drawings and etchings, especially of American subjects, including the Niagara Falls and the deserts of Utah, are particularly sought after and appreciated. His work is represented in the Smithsonian Institution’s Museum of American Art, Washington, and the collections of the Art Museums of Harvard, the National Gallery of Canada, and of important art museums in Los Angeles, Chicago, and Australia. In the UK there are groups of works or collections in the Craven Museum, Skipton, and the New Walk Museum and Art Gallery, Leicester, and Holmes is also represented in several other British collections including the Tate Gallery, London.

Kenneth Holmes retired after 22 years as Principal of the Leicester College of Art in 1956, and after moving to Cornwall where he continued to practice and exhibit as an artist. He died in Camelford, Cornwall, in September 1994, at the age of 92½.

Presidential Address: Address by the President: the Beauty of Prints. Trans. LLPS, vol. 46, pp. 5 – 12. [with illustrations of Holmes’s own work in different media]