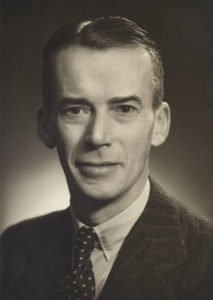 Charles Frears’ grandfather, John Russell Frears, had established the family bakery firm of Frears Bakeries in Leicester, and this was greatly developed under his father, also John Russell Frears, who was also a prominent figure in the civic life of Leicester. His father joined the Corporation as a Councillor in 1906, was elected the 469th Mayor of the Borough in 1913-14 and became an Alderman in 1916. Charles Frears was commissioned as Second Lieutenant in the Nottinghamshire and Derbyshire Regiment in January 1918, and after the war joined the family firm.

By this time both the traditional bread and related baking and the more recent production of biscuits were expanding rapidly and following the merging of the company with Black’s bakery, also of Leicester, in 1924, the business was split in two in two new purpose built factories – Frears and Blacks Ltd on Abbey Lane for the bakery business and Frears Biscuits Ltd. in Woodgate. As their father withdrew from active management Charles Frears took over the running of the biscuit business while his younger brother, John Newton Frears (490th Lord Mayor of Leicester in 1947-48), managed the bakery business.

Frears biscuits became an important national and international producer of a growing range of biscuits, laying the foundation for Leicestershire’s present-day important international position within the biscuit and snack foods industry. Frears developed what became instantly recognised brands such as Morning Tea, Coconut Cookies, Butter Fingers, Ginger Nuts and Teatime Assorted – which were almost as well known for their well-designed decorative biscuit tins which today are collectors’ items. In 1962 the company was bought by the American-owned Nabisco Inc. and began to trade as Nabisco Frears, retaining the traditional Frears brands and introducing others, with Charles Frears as Chairman and Managing Director.

Frears was one of the pioneers of private flying in the county. He gained his Royal Aeronautical Club private pilot’s licence in January 1935 at the Leicestershire Flying Club’s Desford airfield, flying one of the Club’s two De Havilland DH60M Moth biplane with a 100 hp. Gypsy engine (a metal fuselage version of the famous Gypsy Moth). He is believed to have been one of the first six non-military members of the Leicestershire Flying Club to have gained a private pilot’s licence before the Club’s move to the new Leicester Municipal Airport at Braunstone in June of that year.

His public service included serving as a Justice of the Peace, and for many years he played a key voluntary management role in health provision in Leicester, particularly with the hospitals. The Charles Frears School of Nursing and Midwifery on London Road, Leicester, was named in his memory (since 1995 the Charles Frears School of Nursing and Midwifery Campus of De Montfort University). He was President of the Rotary Club of Leicester in 1944-45. Frears joined the Lit. and Phil. in 1932, and in his 1950 Presidential Address he said that his main hobby was gardening, together with carpentry and photography. However, fell walking in the Lake District was another passion, he said, and he took this as the theme for his Presidential Address.