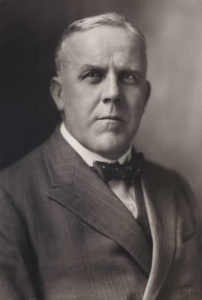 Born in Leicester, Keay began his career as a civil engineer, developing his own partnership and broadening his work into architecture (in time gaining the Fellowship of the Royal Institution of British Architects). In 1923 his practice merged to form the large Leicester-based combined architecture and civil engineering practice of Pick, Everard, Keay and Gimson (since 1991 known as Pick Everard). Alongside his private practice Keay was for many years the County Architect for Leicestershire County Council with a separate office rented from the Council in the medieval Castle House in the Leicester Castle Close.

Among his major building projects as County Architect were substantial extensions to the 19th century County Lunatic Asylum at Carlton Hayes through the 1930s, and the County Offices on the corner of Friar Lane and Greyfriars, Leicester (1936). His many other public commissions included the overall planning and early buildings of the Leicester University College campus (which was to include both the Wyggeston Boys and Wyggeston Girls Grammarc Schools) from 1921, the Holy Apostles Church on Fosse Road South (1923-4), original St. Christopher’s Church in Marriott Road, Leicester (1928 – now the Church Hall). Among his private commissions was the substantial, but sympathetic, two bay extension of 1930 to Ernest Gimson’s “Inglewood” in Ratcliffe Road, Leicester, for the then owners, William Arthur Evans (President of the Lit and Phil. in 1914-15) and his wife Annie Evans (neé Goddard).

In the 1930s with his wife, Mary, he carried out a lot of work on the site of Ulverscroft Priory in Charnwood Forest, making a detail record of the surviving buildings and stabilizing and restoring these and carrying out archaeological excavations over the wider site. A report of this work was published in the Transactions of the Leicestershire Archaeological and Historical Society vol. 18, 1933, pp. 188-92. Keay was also a Lay Canon and the second surveyor or architect to be appointed Master of the Fabric of Leicester Cathedral, holding the position for over twenty years.