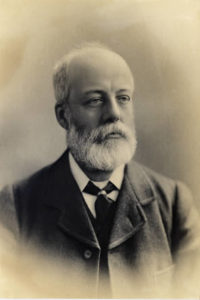 In 1842 Josiah Gimson and his brother, Benjamin, set up Gimson and Company making heavy machinery. A large new factory, the Vulcan Works, was built near Humberstone Road between 1876 and 1879. Josiah Gimson was quickly established as an important and influential manufacturer in Leicester. His engineering firm was one of the largest employers in the city and prided itself on being a model employer in terms of wages and conditions of work. In 1877 he was elected as a Liberal councilor in the ward of West St Mary’s. Josiah Gimson died in 1883 when Gimson was 18. As Ernest Gimson was already becoming established as an innovative architect and designer, the business was left to the mechanical engineers of the family: brother Sydney Ansell Gimson, his cousin, another Josiah, and Ernest’s two half-brothers, Josiah Mentor and Arthur.

Between 1889 and 1891 the firm of Gimson and Company cast the great beam engines which pumped sewage as part of a new system of municipal sanitation to combat the recurrent outbreaks of diarrhoea. These can still be seen (sometimes working) at the Abbey Pumping Station, part of Leicester Museums. At about the same time the firm also cast two large bridges, over the Grand Union Canal at Upperton Road and Mill Lane.

J.M. Gimson apparently declined the invitation to give the traditional Presidential Address to the Society.