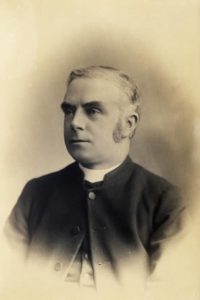 Canon Stocks was born in Leeds in 1843. He was educated at Huddersfield College and at Christ Church, Oxford, and in 1867 took honours in Lit. Hum. Ordained deacon in 1868, he began his ministry as chaplain of Christ Church and curate of St. Philip and St. James, Oxford.

His long connection with Leicestershire began in 1871, when he was nominated by his college to the vicarage of Market Harborough, where he remained until, in 1884, Bishop Magee transferred him to St. Saviour’s, Leicester. After eighteen years’ strenuous work at Leicester, he was Rector of Misterton near Lutterworth from 1902 to 1914, and for the next six years made his home with his son, the Rev. F. C. Stocks, Rector of Foston, Leics.. He was Rural Dean of Leicester from 1891 to 1899 when he was appointed to the archdeaconry of Leicester, an office that he held until his resignation in 1920. An Honorary Canon of Peterborough from 1893, in 1920 he moved to Peterborough as residential Canon at Peterborough Cathedral. He died there in 1926 and was buried on the south side of the Cathedral. Within the Church at national level, he was for many years a member of Southern Lower House of Convo­cation, where he was held in the highest esteem for his personal qualities, and for the remarkable tact, firmness and ability with which he carried out the difficult and responsible duties he was called upon to perform.

He was also very active within local history studies, joining the Leicestershire Archaeological and Historical Society soon after his appointment to Market Harborough. He began to work as co-editor of the Market Harborough Parish Records, the first volume of which (covering the period to 1530) was published in 1890, with the second volume covering 1531 to 1837 was published in 1926, shortly before his death. In the meantime, he assisted in the preparation of the first three volumes of the Records of the Borough of Leicester (1899, 1901 and 1905) and later gave some assistance to his daughter, Miss Helen Stocks, who edited the 4th volume of the Records published in 1923. With another son, Mr. J. L. Stocks of St. John’s College, Oxford, he compiled a scholarly catalogue of The Old Town Hall Library of Leicester, for which he wrote “a delightfully characteristic intro­duction. This quietly-worded essay shows how well he under­stood the books and their associations, and with what warm human sympathy he regarded a ‘collection which, it is strange to reflect, was, when it was founded, a modern library, and is now a relic of the far-off past’.”