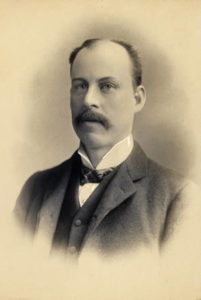 Billson was born in Leicester, the son of prominent local Attorney and Solicitor William Billson Jnr., a partner in one of Leicester’s leading law practices, founded by the radical Unitarian, Samuel Stone – the first Town Clerk of the reformed Leicester Town Council from 1836, (Stone, Billson and Stone, Solicitors, by the 1870s, and Stone, Billson, Willcox and Dutton, Solicitors, by 1881).

At the time of the 1871 census Charles Billson was a 13 year old scholar at Alfred Hyde Harrison’s Preparatory School (“for the sons of gentlemen”) in Dunchurch Lodge near Rugby, Warwickshire. He followed his father into the law, presumably into Stone and Co., and by the time of the 1891 census he was married and living at St. John’ s Lodge, Clarendon Park, Leicester. By 1911 he had left Leicester, since that year’s census records him as “Solicitor – Retired” living Finchampstead, near Wokingham, Berkshire. His a 14 room mansion and the no less than six living-in house servants for a household of Billson, his Yorkshire-born wife, and two teenage daughters, show that he was very comfortably off in his retirement. He died in Hailsham, Sussex, in 1932 at the age of 75.