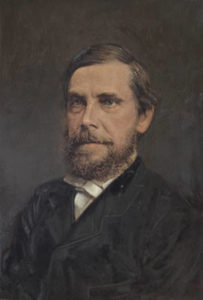 Halford was the son of the second Baronet and the grandson of Sir Henry Halford and was himself the 4th Baronet of the succession. He was educated at Eton and Trinity College Cambridge and after his ordination in 1853 he became curate of Cossington, Leics., and later Vicar of Wistow and Kilby, Leics. from 1867. In 1881 he became Vicar of Brixworth, Northants. for the rest of his life.