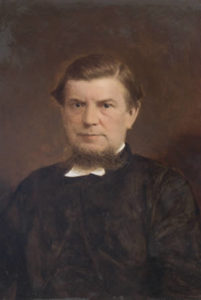 A Particular Baptist minister, Haycroft was born in Stoke Cannon, Devon, and educated at Glasgow University, completing his BA in 1842 and progressing to MA in 1843.

His first ministry seems to have been in Saffron Walden, Essex, where he married in 1848 and is recorded as the Minister of the Baptist Church there in the Essex Directory of the same year. In about 1849 he was appointed Minister of the Broadmead Church of Christ Chapel, Bristol, founded in 1640. (The famous Leicester Baptist Minister and preacher, Rev. Robert Hall, for many years Minister of the Harvey Lane, Leicester, Baptist Chapel, had been Minister of Broadmead from 1826 to his death in 183 1.) Haycorft stayed there for nearly 18 years, during which time he edited and published a very substantial volume of the history of the Broadmead Chapel from the 17th century onwards.

By the 1860s the population of Leicester was growing rapidly and the main Baptist chapels of the town centre were chronically overcrowded during their service, while at the same time the town was quickly expanding southwards along and on both sides of the London Road. Gerald Rimmington has fairly recently studied and reported on the response to this of a number of prominent Baptists in the town. In 1865 meetings were called with a view to building a major new church to serve this expansion. However, most unusually, particularly in view of the factionalism and other divisions of the day, it was proposed that while the ownership and trusteeship would be vested in the Particular Baptist denomination the new Church should be non-denominational in relation to its worship, and open to all Evangelicals for communion on an ecumenical basis. A site for this was found on the corner of London Road and Victoria Road (now University Road) and building started in 1866.

At the same time the promoters cast around for a Minister to serve and lead the new venture, and in 1866 the highly regarded Nathaniel Haycroft unanimously chosen. Moving to Leicester, he was closely involved in establishing the terms under which the new Church would admit members and on its forms of worship. This was all brought together in a “Basis of Union” statement signed by 53 members during the opening morning service of the new Church in January 1857. Under Haycroft’s leadership and inspired preaching the new venture was very successful, and in 1869 Glasgow University awarded him the degree of Doctor of Divinity Honoris Causa. However, in 1873 he died suddenly at the age of only 52, shortly before the end of his period of office as President of the Lit. and Phil.