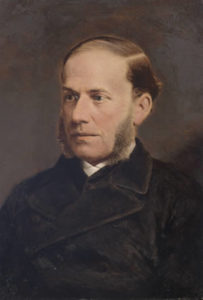 Vaughan was born at St Martin’s Vicarage, Leicester, in 1825, into a long-established and distinguished Leicester middle class family.  His father was Vicar of St Martin’s, Leicester, and his mother was the daughter of the prominent Leicester banker, John Pares.  One of his grandfathers, the physician, James Vaughan, was one of the founders of the Leicester Infirmary.

Vaughan was educated first at the Leicester Collegiate School and then at Rugby School, winning a scholarship in 1844 at Trinity College, Cambridge, where he had a distinguished student and then academic career, particularly in Classics, holding a Trinity Fellowship from 1850 to 1858.  Vaughan was ordained deacon in 1853, and began his pastoral work in Leicester, living on his Fellowship while serving as honorary curate, first to his eldest brother at St Martin’s, and then at St John’s Church. In 1854 he was ordained priest, and in 1855 he became incumbent of St Mark’s, Whitechapel.

In early life Vaughan was influenced by the liberal theology of John Macleod Campbell, to whom he dedicated his Christian Evidences (1864), and while in London he, like Llewelyn Davies, came under the influence of F. D. Maurice, the social and educational reformer. Vaughan’s educational initiatives were regarded as no less successful, and perhaps more enduring, than those of Maurice and his colleagues in London.

In 1862 he started in Leicester, on the lines of the Working Men’s College founded by Maurice in London in 1854, a working men’s reading-room and institute in one of the parish schools. He arranged classes and lectures, taught by volunteers, and the numbers attending them grew steadily. In 1868 there were 400 adults under instruction, and the name of the institute was changed to ‘college’, as being in Vaughan’s words ‘not only a school of sound learning, but also a home for Christian intercourse and brotherly love’. At one time the Leicester Working Men’s College was educating 2300 students. In addition to Sunday morning and evening classes, night classes, and advanced classes, there were established a provident society, sick benefit society, and book club. Some of the students became leading manufacturers in Leicester, and several filled the office of Mayor. Vaughan was President of the College for forty-three years.

In 1893 failing health compelled him to resign his parish, and he retired to Wyggeston’s Hospital, continuing as Master. He died there in 1905, and was buried at the Welford Road cemetery, Leicester.  After his death a large new building for the College, re-named Vaughan College, was funded by public subscription in his memory, and Vaughan College became part of the Leicester University College (now University of Leicester) in 1929 as the focus of its adult education work.

in his memory, and Vaughan College became part of the Leicester University College (now University of Leicester) in 1929 as the focus of its adult education work.