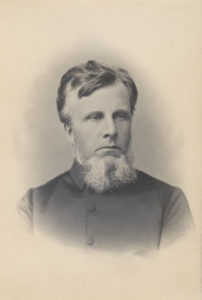 George Barton Franklin, a native of Coventry, taught at Totteridge School with J.F. Hollings, and was a Liberal and Non-Conformist. He came to Leicester in 1845 to be a master at the Proprietary School (now New Walk Museum), but in 1859 started up his own successful school on London Road, known as ‘Mr Franklin’s Stoneygate School’. The establishment soon became popular with the leading Radical families of the town, whose sons Franklin prepared for the Oxford and Cambridge local examinations. Despite this, in a Club discussion Franklin speaks of ‘the evils of competitive exams in keeping clever boys back and inducing a general tendency to cram.’ Mr Franklin retired in 1883 and three of his daughters took over the running of the school.

Shortly before his retirement, on 29th June 1880, he was presented with substantial cash gift accompanied by an elaborate testimonial by his former pupils at a public meeting chaired by the Mayor of Leicester John Bennett, consisting of three pages of text and five more pages of names of the subscribers reading:

It is now we believe about forty years since you entered upon the career of a schoolmaster. You have followed that honourable though arduous profession without intermission from that time to the present; and the number of pupils who have passed under your care during this long term of years has been very considerable.

Of these some are abroad; others are dead and many more are quite lost signt of; but a large number who are still your neighbours in Leicester; or who though living in other parts of the Country have by no means forgotten their old schoolmaster.

Amod these a strong feeling that the time has now come when you might be asked to accept some substantial token of the esteem in which they have always held you:

In offering for your acceptance therefore the accompanying purse we whose signatures are attached to this Address desire you to regard it as intended to convey our sense of the ability and zeal with which you guided our studies; and the pleasure with which we always look back upon the timw we spent under your care; and also as an expression of the gratitude with which we remember that the ordinary duties of tuition; however exacting were far from being your only care; but that you were always actuated by a conscientious desire to influence the character and disposition of your pupils by endeavouring to create in them an early regard for the first principles of right conduct.

We feel that we cannot bring this Address to a close without adding an expression of esteem and affection for the memory of the late Mrs. Franklin; whom so many of us remember as your constant helper and our kind and watchful friend.

That many years of health and happiness may still be continued to you is; Dear Sir, the earnest hope of Your former pupils and life-long friends.

(The list of almost two hundred names that follows

G.B. Franklin was President of the Lit and Phil in 1864-65, a published writer, scholar and art collector. The ‘little gems of art upon his walls were examined and admired, especially his exquisite painting by David Cox, his Harry Wards (a talented Leicester watercolour artist, died aged 29), and several of his own bold and effective sketches. On one occasion, The Club minutes recorded that members saw a certain resemblance in looks between Franklin and the artist Holman Hunt.

F. T. Mott, The Club Poet, commenced his obituary poem for Franklin with these words:-

‘Our gentle scholar! Resolute as man,

Tender as woman. In an aimless world

He stood for virtue, purity, and truth…’

‘Our gentle scholar! Resolute a Tender as woman. In an aimless world