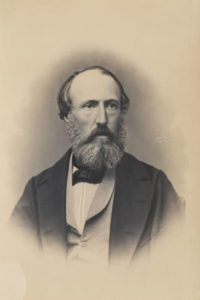 Little has been found so far about Richard Luck beyond the basic genealogical records and he was born, and most likely married, before the introduction of civil registration in mid-1837. The 1841 census records him as a 31 year old Attorney living in Loseby Lane, Leicester, with his 25 year old wife, Anne. In the same year Pigot and Co.’s trades etc. Directory of Yorkshire, Leicestershire, etc. recorded Luck as in practice at the same address as both an Attorney and as a Fire Insurance Agent for the Royal Naval, Military and East India Fire Company.  By the time of the 1851 Census he was practicing as an Attorney at Law with premises at 24 High Street, Leicester, which again appears to have also been his home, as his wife was also registered there in the Census.

The opening of the Chester and Holyhead Railway, linked to the London and Birmingham Railway, in 1850 made the whole length of the North Wales coast, previously served only by the Irish Mail turnpike road, easily accessible, and land speculation and development swiftly followed.  The small previously isolated village of Llanfairfechen, roughly half way between Conwy and Bangor,  began to expand very rapidly, and Bulkeley, its largest estate, came onto the market in 1856. The greater part of the land and buildings including the main “Plas” (= mansion) was bought by Richard Luck, who was described as “a wealthy Leicester solicitor”.  Luck began to transform the land around the house with landscaping including carriage drives, plantations and coverts.  After demolishing the old “Plas” Luck built a substantial new mansion on the site which he named Plas Llanfair (not to be confused with the village and estate of the same name on Anglesy).

It seems that Luck continued to live in Leicester for some years. On the night of the 1861 Census he was away from home and recorded as a Visitor in the records for Rothwell, Northamptonshire, but Anne Luck was registered in their High Street Leicester home and office, and he was presumably still living in Leicester during his Lit. and Phil. presidential years of 1863-64.

However, by the time of the 1871 Census he and his wife were living in the new Llanfairfechen house, and the 70 year old Luck described himself as “Attorney and Landowner”, and the 1881 Census entries are more or less the same.  By the time of the 1891 Census Anne Luck had died as he was listed as a widower, and the household had expanded.  Childless, Luck had been joined in the Plas by two widows: a 75 year old sister-in-law, Susan Taylor, and a 55 year old “Ward” most likely a niece, Fanny North, whose Cambridge undergraduate son, Herbert Luck North, was also in the house along with two resident servants.  Luck died in North Wales early in 1898 at the age of 87, presumably at Llanfairfechen, since the death was registered under the Bangor registration district of Caernavonshire.