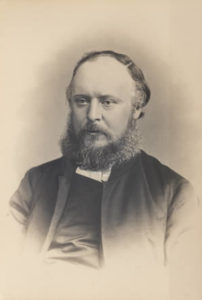 John Owen Picton descended from an old Welsh family, was (probably) educated at Dublin University, ordained a priest in 1848, and instituted as Rector of St Martin’s Church, Desford, in 1861.  He was President of the Lit & Phil in 1860-61.

Within The Club he acquired a reputation as an amusing raconteur, with his long, rambling, but highly entertaining yarns about famous personages known to him, preferring this to philosophy or argument – ‘the Rector being with us, anecdote reigned supreme.’ Forgetful too, it seems, for ‘Picton, though expected, neither turned up nor wrote, according to his usual practice.’ And regarding his non-attendance, ‘the Rector’s custom of leaving us in suspense had passed into a proverb.’

Sometimes Club excursions were made to Desford, and in November 1864 members travelled by train to Picton’s parish, where they enjoyed the church, the Rector’s garden and allotments, a meat tea at 6.00pm and one-and-a-half hours of pleasant chat around his fireside. Records show that Picton had a private income from land ownership, but this did not prevent him from allowing his parish church to fall into disrepair. For following his death, his successor found the building in an appalling state of repair, exclaiming, “When I looked up I saw the roof was cracked and in danger of falling. Then there were two grand steps to the pulpit, one of which gave away and the floor of the pulpit was unsafe…”

The Club minutes for November 1882 record that ‘Picton, the “jolly Rector” died last week. The fearless, manful, kindly heart is lost to us. The sturdy brain which grasped all learning, and held it in the grip of an unfailing memory is gone to feed the worms…. He died from that same mysterious and sudden Paralysis which took Caillard from us 9 years ago. But while Caillard lingered for months, Picton’s misery was ended in three weeks.’ Only Stevenson was able to attend the funeral at Desford, taking with him a wreath of white Camellias which he laid upon the coffin in the name of The Club. (When searched for in 2010 Picton’s grave at Desford  could not be located)