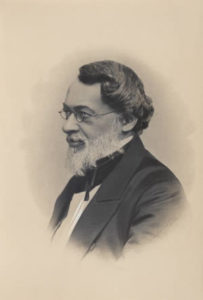 Charles Camille Caillard, was a French Chevalier and refugee from Paris, who was described in the records of ‘The Club’, which noted that ‘he remembered Waterloo; had fought on the barricades of Paris in 1830; fled to England for liberty; married a faithful English wife; settled down among us as a Professor of modern tongues, brought up two sons and one daughter in all English virtues and all French refinements.’  He was appointed as the French teacher at the Collegiate School, though as the only native French teacher in the town he no doubt would have had private pupils as well. He also taught French at Belmont House School for girls.

He was the oldest member of ‘The Club’ and its only ‘one of foreign blood’. It was he who initially took up the idea of The Club and hosted its inaugural meeting following the original gathering at the home of George Stevenson; for ‘while an Englishman deliberates a Frenchman acts. M. Caillard, following up the suggestion of Mr Hollings, invited nearly the same party to spend an evening at his house a few weeks afterwards.’  Monsieur Caillard and for twelve years he loved and supported The Club with heart and soul. And for the people of Leicester, ‘how many rude tastes had he refined; how many dull intellects enlightened from his warm emotional brain!’

The Frenchman was a published writer, and very active in the Lit and Phil. He was its  President  for 1855-56, in which year the Annual Report stated that: ‘Recognising France and England are united in arms the Council has chosen M. Charles Camille Caillard as President for 1855-6.’  Within the Society he was  the first to suggest the inclusion of lady members.

Caillard was also a musician organising both mucical and theatrical events for the Lit and phil, while it was recorded that within ‘The Club’ that on Club picnics he would ‘entertain us with some French songs, memories of his youth in the boulevards of his beloved Paris.’

At the end Caillard became ‘a helpless cripple’, much to the distress of his Club companions – ‘our Gallic hero a prisoner at the point of death’ – and in a letter of condolence to his widow from Club members they remembered him as ‘a faithful and ardent friend; the brave defender of all social liberties; the earnest leader in every educational effort; the unfailing advocate of all that was artistic, tasteful and refined’, and especially as ‘the Patriarch and Inaugurator of the Club’.