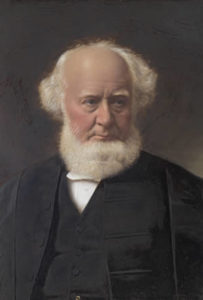 William Napier Reeve was a Conservative, Nonconformist, London solicitor who came to Leicester in 1842 to join the firm of William Freer in New Street. He became Clerk of the Peace (1879), Clerk to the Lieutenancy, Under-Sheriff, Under-Treasurer for the County, Clerk to the Lunatic Asylum, Clerk to the Visiting Justices of the Gaol, and Deputy-Constable of the Castle. According to his obituary, he was ‘a man of more than average ability and considerable intellectual gifts,’ but the Minutes of “The Club” described him affectionately as ‘our white-haired patriarch, the smallest amongst us in body, but perhaps the largest in heart and brain’.

Reeve was a Fellow of the Society of Antiquaries, twice a Lit and Phil President (1854-55 and 1882-83), and a founder of two of Leicester’s Conservative Clubs. He fought for the sculpture gallery at the Museum, and supported the movement for the preservation of ancient footpaths. A man of zeal and vigour, and ‘foremost in all matters in which the heart was most affected‘, he ‘had large and broad sympathies with the people, and urged the necessity of providing for their mental and social culture as well as their physical improvement.’ W.N. Reeve was highly-cultured, a scholar, with powers of oratory, and knowledge of poetry, literature, history. The Club noted ‘his refined but enthusiastic eloquence which he knows so well how to use’ and recorded an occasion when he ‘gave a dazzling defence of the present age, its literature, its science, its moral heroism’.

Reeve was also a prolific author. Under the pseudonym, ‘Eliot Roscoe’, he wrote such titles as Bradgate Park (1867), The Christmas Tree; a Leicester story (1867) and Letters to a young man(1875); and the Leicester Journal published a series of his articles under the name of ‘Father Austin’. However his enduring literary work was Chronicles of the Castle and of the Earls of Leicester (1867) which is still in print today. A venerable and eloquent host at Club meetings, Reeve’s lavish suppers frequently exceeded the regulation modesty dictated by the rules of The Club, whose records describe him in later years as ‘crowned with patriarchal snows, and as full of heart and fire as in bygone days.’