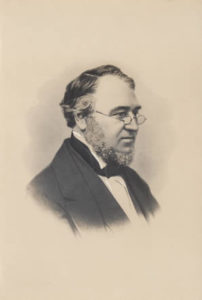 Hollins was a schoolmaster, Borough Councillor, Mayor, magistrate, three times Lit and Phil President (1846-47, 1853-54 and 1858-59), Mechanics’ Institute President, writer, newspaper editor, historian, researcher and scientist, stands as the figurehead of The Club. For it was he who rose at that very first informal supper party, and with his usual vigour declared “Stevenson, this must not end here.”

Born in London and educated at Christ’s Hospital, Hollings came to Leicester in 1837 as the second master and a tutor in science and Latin at the new Proprietary School (now New Walk Museum). In 1846 he was promoted to Headmaster, but within a year the school had failed and was closed. J.F. Hollings wrote prolifically on the town’s history; he produced a definitive Paper on the Civil War in Leicester, extensively researched the town’s Roman history, and gave weekly public lectures on many diverse topics.

Hollings married Sarah Biggs, apparently after she had submitted to his experiments in mesmerism! Well-educated in Greek, she was sister to the highly influential Leicester manufacturers and politicians, John and William Biggs. As editor of the Leicestershire Mercury Hollings gave eloquent support to the political ambitions of his brothers-in-law and in 1857 was elected a Councillor to John Biggs’ old seat of St Margaret’s Ward.

A few weeks after Sarah’s untimely death in 1862 from typhus, and amidst the crumbling political careers of the Biggs brothers, in despair James Hollings hanged himself from his bed-post in John Biggs’ home, a nine-bedroomed mansion in Stoneygate, which stood in five acres of land, now Knighton Park Road.Hollings’ words, ‘This Must Not End Here’, were engraved on the lip of The Club’s Cup; but he did not live to see it. His tragic death was deeply felt by every member and some laid blame on Biggs. ‘His genial heart, his kindly temper, his universal knowledge, his fluent and cheerful conversation, made him the very life and soul of our pleasant meetings.’ He had ‘the heart of a woman and the brain of an encyclopaedia, learned on all points but unable to say no.’

Hollings was buried in Welford Road cemetery in the grave of John Biggs, and a fine Gothic column public memorial was erected to him in the New Walk Museum grounds. Most of The Club were on the committee supervising its design and erection, and its Latin inscription was composed by Franklin, though Caillard and Mott insisted on some words in English too – for future generations and foreigners who might be ignorant of Latin. In 1955 the Hollings memorial was considered unsafe and instructions were given for its demolition.

Exactly ten years after Hollings’ death, members of The Club were assembled at the Knighton Park Road home of Williams, built in the grounds of the former Biggs mansion. Then, at the mention of their beloved friend’s death, came ‘a momentary silence into our cheerful circle’ because – ‘as it were, above our heads that sad midnight tragedy was played out.’