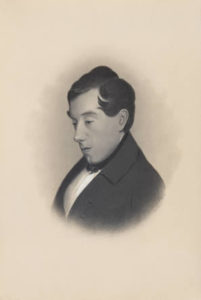 Since Thomas Smith is one of the most common names in 19th C. England it is not easy to be certain about references to the Lit and Phil’s 4th President in the usual genealogical and related records. However, the Thomas Smith who was a Fellow of the Society of Antiquaries (FSA) was living at Birstall House, Birstall, near Leicester, at the time of the 1841 Census, aged 45, and born in the county. Birstall House is shown in the 1st Ordnance Survey 1” map of 1835 as a very substantial property within its own large grounds on the southern edge of the village, but now long-since demolished and built over.

His profession was listed as Banker, and in addition to a number of servants, the Census recorded his 40 year old wife, Susanna, and 20 year old son, Francis (both also born in the county). Francis was later ordained and published posthumously his father’s last book in 1861. Thomas Smith was a member of the Camden Society (the forerunner of the Royal Historical Society) by 1838, and was recorded as their local representative for the Society for Leicester and district, including for the payment of subscriptions, with the Birstall House address. However, so far no records have been found of either Thomas or Susanna later than his Lit and Phil Presidency in 1842-43, and by the time of the 1851 Census Birstall House seems to have been a private school.

However, there are a number of records of the Revd. Francis Smith. In 1837 he married in Leicester Harriet Louise Allen, born in 1822 in Scraptoft, Leicestershire, and their first two daughters were born in Leicestershire. However, the family moved to Manchester in 1849 or 1850 when Francis became Curate of St. Paul’s, there, and he and his family were recorded in Manchester in the 1851 and 1861 Censuses. However, neither of his parents were living with the family, so it seems quite possible that both Thomas and Susanna died before 1851.

Despite his description of Banker in the 1841 Census, o far it has not been possible to link Thomas Smith FSA to any particular Bank. However, a Smith family had been in banking since the late 17th century, initially in London, where the family firm became Smith, Payne and Smiths, with a growing number of largely independent local banks being established by different members of the family in major English towns from 1769 (Nottingham) onwards. They also served as clearing banks for the banknotes, cheques and other financial instruments for both their own affiliated banks and many other local banks outside London, including Clarke, Mitchell and Co. (which failed in 1843) and Parr’s Leicestershire Bank of St Martin’s, Leicester, and Nottingham. However, Thomas Smith’s banking affiliation (if any) is not recorded in either of the two local Directories of the late 1830s and early 1840s, nor in the histories of banking: Smiths the Bankers 1658 – 1958 by Leighton-Bryce (1958) or in the George & Price Handbook of London Bankers (1876).

Thomas Smith published a number of works on medieval history and literature of antiquarian interest of which there are copies in a number of the British Library and other leading libraries, including:

The Chronicle of Geoffry de Villehardouin, Marshal of Champagne and Romania, concerning the conquest of Constantinople, by the French and Venetians, anno MCCIV. Translated and edited by Thomas Smith (London & Leicester, 1829). The Völuspá (Leicester, 1838). [Based on a paper read by Smith to the Leicester Lit and Phil on 6th April 1838.

The Völuspá is a poem on the creation of the world contained in the “Elder Edda” 13th century compilation of Old Norse verse – one of the key sources of Norse and Icelandic mythology.

Arminius: a history of the German People and their legal and constitutional customs, from the days of Julius Caesar to the time of Charlemagne by the late Thomas Smith Esq. FSA. Edited by his son Rev. Francis Smith (London & Colchester, 1861).

Note: This entry is a “stub”: if you have any more information on Hon. Revd. Erskine please contact the Society through archives@leicesterlitandphil.org.uk