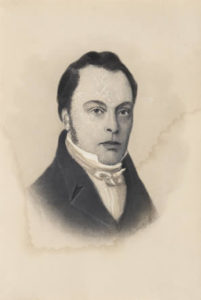 Very little has so far been found about Ryley (sometimes – apparently incorrectly – spelt Riley). In the 1841 Census he is recorded (as “Riley” with his age of 60 shown in the female column on the census return!), as “of independent means”, staying at the Friar Lane School, Leicester (apparently a small private establishment run by John Clarke).

The 1851 Census gives his name (correctly) as “Ryley”, and records him as a widower, aged 71, born in London, living at 81 Southgate Street, Leicester, the house of William Bucknall (an upholsterer by trade)and his wife Elizabeth Bucknall. Ryley and two others of the six listed at that address is described as an “Inmate”, probably suggesting that they were invalids boarding and being cared for by Mrs Bucknall. His death is recorded in the Leicester Register for 1856.

Note: This entry is a “stub”: if you have any more information on John Riley (Ryley) please contact the Society through archives@leicesterlitandphil.org.uk