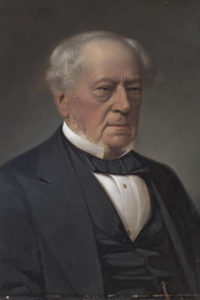 Born in Halifax, West Yorkshire, Shaw studied at Caius College, Cambridge, and became a doctor, and later a Fellow of the Royal College of Physicians of London.  After a period in Manchester, where he became a Member of the Manchester Literary and Philosophical Society, he moved to Leicester and established a medical practice, presumably from his home at 20 New Street, St Martin’s, while hoping for the possibility of an opening at the Infirmary (which he did not in fact achieve for several years) .

In the Spring of 1835 he and Alfred Paget joined together about the possibility of establishing a Literary and Philosophical Society to draw its membership from both sides of Leicester’s deep political and religious divide during the period of national and municipal political reform.  This cooperation between the two was symbolic of what they were seeking to achieve as Shaw was a Churchman and a Tory, while Paget, like most if not all of his family, was a Liberal and a Nonconformist committed to radical reform.

The two brought together a dozen or so leading figures of the town, again from both sides of the divided society, who supported the project, and the Leicester Literary and Philosophical Society was dull established along the lines of the Manchester Lit and Phil by July 1835. It was hoped that Sir Henry Halford Bart. Of Wistow Hall, Leics., the King’s Physician, would accept the Presidency of the new organisation so Shaw was elected ‘Acting Chairman’ while Paget became the Secretary.  However, Halford twice refused and Shaw remained Acting Chairman through the first session of the Society.

1835. Discourse on Science and the Value of Knowledge. (Leicester)

1838. Presidential Address. The Moral and Physical Condition of the Working Classes

1850. The Character of the Literary Tastes of the Day

1884: Inaugural Address delivered by George Shaw, M.D., Cantab. October 6th 1884: the Fiftieth Anniversary of the Formation of the Society (Published for the Society as a separate pamphlet by Clarke and Hodgson, Leicester, 1885)

A book is available about Dr Shaw

“My Cousin George” is a book by Mr John Shaw Pollard about his ancestor Dr George Shaw, founder of the Leicester Lit and Phil. Mr John Shaw, who is a member of the Society, has kindly provided several copies for sale at the discounted price of £13.00 including postage and packing.  If you would like a copy, please contact Mrs Hilary Lewis: hilary.lewis@leicesterlitandphil.org.uk